With the 100 year anniversary of the Alaska Native Brotherhood (ANB) occurring in 2012, many will be reflecting on the history, role, and actions of ANB.

I recently came across the ANB Grand Camp Program for 1921 (scan below). While no minutes from the 1921 meeting have survived (although SHI has published the 1920 ANB minutes), the 1921 program lists the convention’s agenda and the topics discussed. Some of the issues of the day included fishing rights, segregated schooling, Civil Rights, Human Rights, and discussions on sovereignty and land ownership, such as through a reservation system. The final open forum topic for the third day of the meeting, which poses questions for discussion on the legality and fairness of the judicial system in Alaska towards Alaska Natives, is of particular interest. Scheduled be held after a speech on the rights of Alaska Natives presented by Hon. James Wickersham, it reads;

“Open Forum. The tremendous handicap of fair trial by juries composed entirely of White men, through an interpreter, leading to the question; “Would a lone White man consent to a trial by Natives in “Indian Country.”

Such a document provides a glimpse into the history of ANB and the issues of importance to Southeast Alaska Natives nearly 90 years ago. 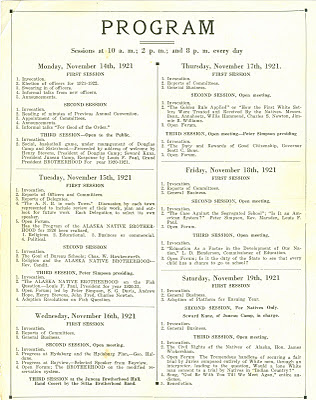