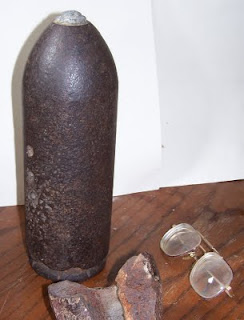 Family heirloom a reminder of clashes with government

Della Cheney remembers playing with a family heirloom growing up, a rather strange looking metallic object that wasn’t easily moved about.

The heirloom? A roughly 12-inch long, 30-pound unexploded round of ammunition that struck the village more than 140 years ago.

Or in the words of one of the descendants who found the shell resting on the other side of a hole in a Southeast rainforest soaked stump, “It was an annoying object when you stubbed your toe on it but a great conversation piece.”

Kake elder and magistrate Michael Jackson, Della’s brother, remembers the shell being in the family forever.

Jackson said the shell had been buried in Kake since 1869.

When a Kake resident was clearing property for the building of the Alaska Native Brotherhood Hall in the early 1940s, the 30-pound Parrott Shell and other shrapnel was found near a rotten stump with a hole in it.

“That was why it didn’t explode,” Jackson said. “It went through the stump and was laying on the other side of it.”

The late Thomas Jackson Sr., Michael’s father, became the caretaker of the shell and once said, “There will be a time this history and artillery shell will have to be brought out.”

The shell passed within the family without incident for decades until older brother Norman Jackson died in 2005. The shell stayed in his house because no one was staying there.

Recently a nephew wanted to move into the family residence and the shell came up in conversations with a Kake Village Public Safety Officer.

The VPSO contacted Alaska State Troopers in Juneau who contacted Homeland Security who then contacted an explosives unit at Elmendorf Air Force Base in Anchorage. The actions happened so swiftly, many in Kake feared the government was again trying to take away a part of their heritage.

“Our hope is it can be determined safe and can remain in the community,” Trooper Capt. Kurt Ludwig said. “We just want to err on the side of caution. Sometimes unexploded explosives that have been around a long time can be even more dangerous.”

An explosives ordnance disposal unit from Elmendorf Air Force Base in Anchorage arrived in Kake on an Alaska State Trooper’s plane Thursday to investigate the shell.

The ordnance was deemed an unknown risk by the bomb specialists and will be left in private care until an expert munitions contractor can come into Kake to defuse it. The Organized Village of Kake will be working with Sealaska Heritage Institute to secure that contractor.

Jackson said after talking among the village elders and looking at historical protocols of the tribe, “Things need to be slowed down because we had a death in the village recently. The healing needs to be complete before we move ahead with the bomb. We had hoped that the bomb squad would stand down and just do an evaluation of it.”

Jackson said all actions beyond Thursday’s assessment were delayed to a later date when the community can fully concentrate on the ordnance issue and begin full consultation with the Department of Defense.

The shell is believed to be part of what Kake villagers and descendants call the “Kake War” in 1869, in which the U.S. Government destroyed the village.

“Kake has a history of being bombed,” Jackson said. “Both by Russians and Americans twice.”

Jackson said good-naturedly the Norwegians around the corner in Petersburg were always friendly, “They dropped off crab whenever they came through.”

The Kake tribe of Tlingits historically controlled trade routes around the Kuiu and Kupreanof Islands in Frederick Sound and would defend their region against other tribes and early European fur traders.

Shortly after the U.S. took possession of Alaska from Russia in 1867, the military began to enforce a controlled environment on Natives there.

A hunting party of Kake Natives who had been camping at the Fort Sitka settlement decided to return home. Military authorities forbade the departure and in an ensuing scuffle a non-native sentry killed one of the Natives. The party was then allowed to leave.

The Tlingits encountered two miners, Ludwig Madger and William Walker, camped near Point Gardiner on Admiralty Island. In accordance with their traditional custom, the slain Native’s family atoned for the death by killing the two miners. Their bodies were mutilated and the cove is now known as Murder Cove.

When news of the killings reached Sitka, the U.S. Navy dispatched the armed vessel Saginaw to Kake and shelled three Kake village sites and three smaller campsites and canoes. The vessel’s crew then proceeded to destroy, burn, and pillage the tribal houses and food caches in the heart of winter, leaving the families homeless.

The natives were forewarned and escaped but lost most of their canoes and shelters. Kake residents dispersed to other villages to live and it would take two decades for Kake to reconstitute itself.

In 1970 one local Kake elder stated, “No compensation or reparations for this injustice were ever sought by the Kakes, nor was there an apology or reparation payments offered by the United States of America.”

Jackson stated that the unexploded ordnance is the property of the tribe and the village.

“We are erring on the side of caution and safety for the tribe,” Jackson said. “But we want to turn it over to the bomb squad formally, in our own way. They will have to admit that it is Department of Navy ordnance (from) 1869. It is a real part of evidence of Alaska natives encounters with the U.S. Navy back in those days.”

Jackson said the tribe wants to give the ordnance to the Sealaska Heritage Institute or the State Museum and be held as Kake history but also as Tlingit history with the Navy.

The bomb has been documented in photos and sent to Jones at Sealaska Heritage Institute and Steve Hendrickson at the State Museum.

The Angoon shelling occurred 13 years after Kake’s. A native was accidentally killed on a whaling ship operated by Northwest Trading Company, which had a herring and whale reduction plant south of the village at Killisnoo. A whaling gun exploded and fragments struck Tlingit Tith Klane, a medicine man from Angoon.

According to Congressional reports the Natives demanded 200 blankets in retribution for the life of Klane. It was alleged the Natives took over the whaling station and would burn the buildings and kill their white prisoners if demands were not met.

The Navy sent in the USS Adams, the Sitka-based revenue cutter Corwin, and armed the whaling tugboat Favorite. The Natives released control of the station. Capt. E.C. Merriman of the Adams then demanded that the natives turn over 400 blankets to the Navy. According to the Corwin’s commanding officer, Lt. M.A. Healy, and Angoon village records 82 blankets were offered, so more than 40 canoes were destroyed and the village shelled and burned.

“The shell is a real reflecting situation,” Cheney said. “With all the war situation that occurred with it, there is a lot of history, healing, and some government acknowledgement that this came from them.”

“The bomb has just been sitting here. It isn’t going anywhere… we hope,” Jackson said. 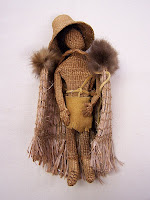 As an organization representing the Tlingit, Haida, and Tsimshian people, and an organization that also cares for cultural and ethnographic objects, Sealaska Heritage Institute (SHI) occasionally receives inquiries about the linguistic terms for cultural and ethnographic objects. These inquiries come from practicing artists, educators, museums, and other interested researchers. As a result, Sealaska Heritage Institute compiled a list of Haida language terms for cultural objects and material types from Dictionary of Alaskan Haida, which was compiled by Dr. Jordan Lachler and published by SHI in 2010. While this list is not exhaustive, it does provide Haida words for the most common cultural objects and material types. For those interested in examples of how the Haida language has been used in art publications, for Alaskan Haida see; Living Our Cultures, Sharing Our Heritage: The First Peoples of Alaska (2010), and for British Columbia Haida see; The Spirit Within: Northwest Coast Native Art from the John H. Hauberg Collection (1995). 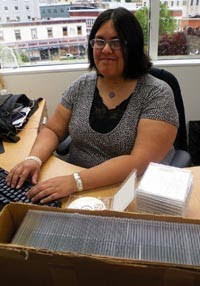 Sealaska Heritage Institute (SHI) has joined with a state university in an internship program designed to foster more archivists and museum curators.

SHI’s first Tlingit intern under the program, founded this year by the University of Alaska Southeast (UAS), was just accepted into graduate school to pursue a career in archives and given a full scholarship.

The news was gratifying because there are so few Tlingit, Haida, and Tsimshian people working in the field of archival science, said SHI Archivist Zachary Jones, who cares for the institute’s ethnographic and archival collections.

“It’s really important to have Native archivists working in the profession because a lot of times they bring a special perspective and understanding of materials that concern their own people,” Jones said. “I think the field also needs diversity.”

Traditionally, Native history is preserved orally—stories are passed from one generation to the next. Native history also is preserved through material culture. For example, crests worn on regalia often document Native history. The modern age has brought with it photographs, documents and recordings, and special training is required to properly preserve them.

For Alyssa Peterson—SHI’s first Tlingit intern under the program—the internship made her change course. Peterson, Deisheetaan from Kake, wanted to be a librarian when she was younger. But she abandoned that plan in college, where she became more interested in anthropology and Northwest Coast art. Jones, SHI’s archivist, met Peterson through a class he teaches at UAS on archives and museums theory and practices. He encouraged her to intern at the institute.

“When I started interning at SHI, I realized that I could combine my interests with a career in archives. It was a bit of a revelation,” Peterson said. “I can do what I love and still work toward cultural preservation. SHI has definitely shown me that.”

Jones helped her to apply to graduate school, and Alyssa was recently accepted to San Jose State University in California and given a full-ride scholarship to pursue a masters in library science.

The program at UAS is open to all students, and SHI welcomed two non-Native interns this year as well. Students who participate in the internship program receive UAS credit.

Sealaska Heritage Institute has many collections that have potential for study and are of educational value. One recently accessioned collection of interest is a Dyed Yarn Exhibit, an exhibit that was created during the 1990s to show how Chilkat weavers can (and did) create colors to dye their weavings. This exhibit shows the color combinations that can be generated by combining certain natural and organic materials found throughout Southeast Alaska. These combinations were used to dye the yarn, which yielded a color spectrum of browns, yellows, grays, and pinks, and a simple but informative exhibit was created to show the results and the combinations used. Below are images of these two exhibits. Although this exhibit is certainly not comprehensive, as additional colors are found in historic blankets, this exhibit raises interesting questions about colors appearing in historic blankets. 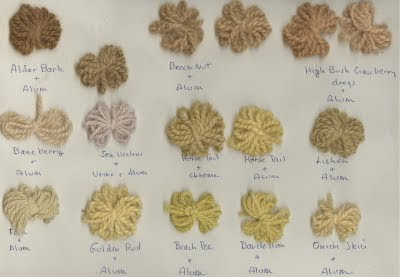 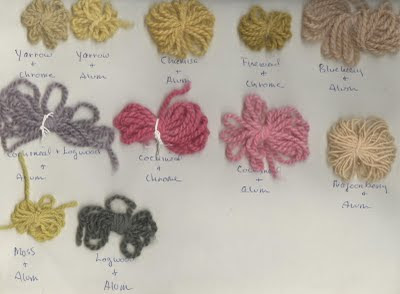 Sealaska Heritage Institute is a Native nonprofit established in 1980 to administer educational and cultural programs for Sealaska, a regional Native corporation formed under the Alaska Native Claims Settlement Act. The institute’s mission is to perpetuate and enhance Tlingit, Haida, and Tsimshian cultures. The institute collects Tlingit, Haida, and Tsimshian art for study, education, and exhibition.