The Sealaska Heritage Institute (SHI) recently obtained a new Haida art item for inclusion in our (image below). This piece was carved by emerging yet accomplished artist Matthew J. Helgesen. Helgesen was born in , , and raised in . He now lives in . Helgesen is Kaigani Haida of the Eagle Clan, and has studied under Warren Peele of Hydaburg and as an apprentice of Norman Jackson of . 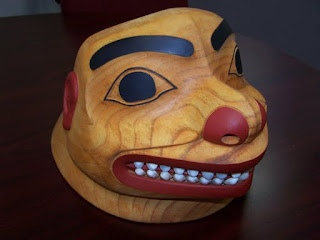 The piece SHI obtained from Helgesen consists of a carved and painted war helmet modeled after an eighteenth century war helmet. War helmets, which were held as clan property, were an integral piece in a warriors’ armor for both physical and spiritual protection. After the introduction of rifles, their use was relegated to the ceremonial sphere. This helmet is a quality art piece that took great skill to create, and we are proud to add it to our collection. We plan to place it on display in our library Reading Room when a new display case we recently purchased arrives.

Regarding Helgesen’s inspiration for this helmet, it was modeled after a Tlingit war helmet that sold at a private auction in in 2008 (image below). The Tlingit helmet, described as an eighteenth century piece, established a record price for any Native American Indian art piece ever sold at auction, coming to near $2.2 million dollars. Sadly, this Tlingit helmet was sold to a private collector and is off limits to public viewing and repatriation claims. While the loss of the Tlingit helmet is profound for the Alaska Native community, Helgesen’s piece stands as a reminder of the impressive ability found in the continuing Southeast Alaska Native artist culture. 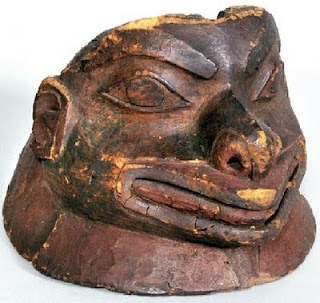 "Both my parents were lifetime members of the ANB and ANS respectively. They devoted most of their lives fighting for Alaska Native rights. By donating all the photos of the ANB and ANS to Sealaska Heritage Institute I wish to honor their memory and accomplishments, as well as the other ANB/ANS elders past and present," Wallace said.

SHI President Rosita Worl said it’s a privilege to have a collection given in honor of Dorothy and Amos. “Dorothy and Amos were active in the Native community and Amos was a well-known artist and mentor to young artists,” Worl said.

Wallace’s donation has helped the institute build a repository of materials that document the ANB-ANS, said SHI Archivist .

“It’s important that we have the records of the Alaska Native Brotherhood and Sisterhood because it helps document the activities they’ve done presently and in the past, and it helps capture the importance of these organizations,” said Jones, adding the institute also in recent times received donations of materials documenting the ANB-ANS from other people, including ANB Grand President Emeritus Dr. Walter Soboleff.

“SHI Special Collections really wants to collect these types of materials because it gives voice to great achievements in Alaska Native history. And the more materials like this we have, the better our library is for researchers,” he said.

SHI also acquired twenty historical images dating between 1883 and 1941. One of the more unusual photos shows the interior of a house and a display of Tlingit regalia and American military uniforms. The photo, obtained from Alaskan Heritage Bookshop owner of , was taken circa 1900 by Frank La Roche and inscribed “Interior of Capt. Jakes house, Killisnoo.” Another shows a marriage of two Native people who are seen standing under cedar boughs. The images are rare glimpses into Southeast Alaska Native life a century ago.

“We have some photographs of village life, of early village scenes, of people gathering for certain events. All in all, these pictures are really great and give us insights into the way people lived and how life was over a hundred years ago,” Jones said.

Many of the images are posted online with links through www.sealaskaheritage.org. Direct links are as follows: Brian Wallace Collection and Richard Wood Collection.

The institute collects materials that document the Tlingit, Haida, and Tsimshian people and makes these materials available to the public for educational purposes. SHI employs an to care for them. Sealaska Heritage Institute is a Native nonprofit established in 1980 to administer educational and cultural programs for Sealaska, a regional Native corporation formed under the Alaska Native Claims Settlement Act. The institute’s mission is to perpetuate and enhance Tlingit, Haida and Tsimshian cultures.