A rare image and the story of George Schwatka

Collector Richard Wood this week donated a rare image to Sealaska Heritage Institute showing George Schwatka (Ind-A-Yanek) in Haines circa 1900. Ind-A-Yanek (later known as George Schwatka) was often photographed by early photographers of Alaska, though this image is quite rare--in part because it’s the only known image of a Tlingit on a horse during this period. Ind-A-Yanek of Klukwan is sometimes remembered as a guide to non-Natives who traveled inland during the gold rush era and exploration period, slightly before and after the turn of the century. In 1883 the federal government sent 1st Lt. Frederick Gustavus Schwatka (1849-1892) to Alaska to do a survey of routes from Haines to Fort Selkirk, Yukon. Lt. Schwatka hired Ind-A-Yanek to guide his party for the survey. Ind-A-Yanek did so, but Schwatka refused to pay him after his work concluded. Ind-A-Yanek told Schwatka that he would take his last name for the rest of Ind-A-Yanek's life as a ridicule payment, and thereafter Ind-A-Yanek was known as George Schwatka. 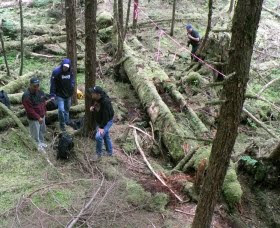 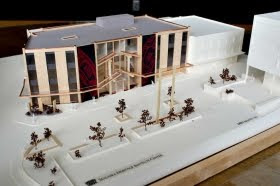 The Sealaska Heritage Institute’s Native cultural center, named after Dr. Walter Soboleff, is expected to give a big push to the study and preservation of Alaska Native history, culture, art and language.

The center’s building is located across from Sealaska Corp.’s headquarters on a site that once was a downtown eyesore. It is also expected to give a boost to the city’s center.

Sealaska officials are showing off a new architect’s model of the $22.5 million building, as they continue fundraising to get it built.

“It will be a first-institution for the study of Native cultures, preservation of historical papers and ethnographic collections, and the preservation of Native art,” said the Institute’s President Rosita Worl, in information presented to the Alaska Legislature.

The lawmakers came through with $5 million for the project in the budget adopted this year and recently signed by Gov. Sean Parnell. Together with $2 million previously appropriated by the state, the Institute now has substantial funds with which to continue development.

The Juneau legislative delegation, with strong backing from the City and Borough of Juneau and local and regional group, has been a strong supporter of the project as well.

“The Sealaska Heritage Institute holds one of the most significant collections of Tlingit archival material in the world,” she said, and the new center will enable the preservation of that material.

“It will have a very strong educational component as well, the active promotion of Tlingit dance, language and art,” she said.

The building will go on the site of an historic building constructed in 1896 that burned in 2004. It had formally been known as the Town Center Mall, but was commonly called the “Skinner Building,” after a former owner. Historically it had been known as the C. W. Young building.

Sealaska Corp. purchased the site a year ago for $800,000 to donate to the institute.

Sealaska’s purchase ended the site’s eyesore phase. After the burned wreckage was removed, all that was left was a hole in the ground known colloquially as “The Pit.”

Sealaska filled and landscaped the site, removing the threat from crumbling sidewalks and its litter-attracting features.

The new building is being designed by MRV Architects, with 29,500 square feet, taking into account Northwest Coast Native art and architectural traditions.

In addition to the historical collections it will house in both exhibits and storage, there will be research space, offices and areas for art demonstration. It will be open the public.

Additional fundraising is needed to complete the project, but U.S. Sen. Lisa Murkowski has praised it and promised to seek support for it from her colleagues.

She called plans for the center and its programs “vital steps in the right direction to creating a knowledge base of Alaska Native history and culture in the heart of Alaska’s capital city.”

Muñoz said the she hopes the federal fundraising will go well, but that with her colleagues in the Alaska Legislature all it took was education about the project to win their support.

The center, she said, will be an important addition to downtown Juneau.

“It’s going to be a beautiful facility,” she said.