In 1912 thirty-five year old Japanese national Seiki Kayamori arrived in Yakutat, Alaska to work at the local salmon cannery. He joined a crew of Japanese, Filipino, and Tlingit workers already employed in the Yakutat cannery. Kayamori, however, was an amateur photographer, and spent the next thirty years photographing the people, community life, and environment around Yakutat, and his surviving photographs provide an intimate glimpse into the environment and life of those in Yakutat between 1912 and 1941.

In 2012, a century after Kayamori arrived in Yakutat, Sealaska Heritage Institute received 28 photographs taken by Kayamori, a donation by Yakutat born-resident and Tlingit leader Byron Mallott on behalf of the community of Yakutat. These 28 photographs were recently discovered in Yakutat and have now been scanned and placed online [click here]. Sealaska Heritage Institute is interested in engaging the public to assist in photograph identification and study. 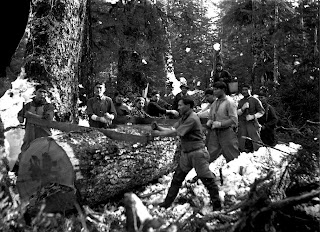 The bulk of Kayamori’s photographs were obtained by the Alaska State Library in 1976, amounting to 694 images. The State Library’s collection of Kayamori photographs (PCA 55) has been studied with great interest, and some of the Kayamori images have been placed online via Alaska’s Digital Archives. The photographs and life of Kayamori will continue to capture the interest of educators for generations to come, especially on account of Kayamori’s unfortunate death. The below text provides a slightly more detailed biographical sketch of Kayamori and suggestions for further study. Sealaska Heritage Institute is pleased to make this collection open to the public for research and educational purposes.

Seiki Kayamori (1877-1941) was born in 1877 in what was then the village of Dembo, today part of Fuji City in central Japan. He was the fifth of eight children; the second of four sons. The wealthy and prominent Kayamori family owned a paper mill, farm lands and a small department store. Under Japan’s conscription law, Kayamori likely served a three-year military term. The law also required an additional three-year term in the reserves. In 1903, Japan was on the brink of war with Russia, and reservists like Kayamori waited to be called back to duty.

In September 1903, Kayamori turned 26 aboard the steamer Iyo Maru during the voyage from Yokohama to Seattle. He arrived with $87.10 and a steamer ticket for San Francisco, according to the ship’s manifest, which lists his last residence as Tokyo and his occupation as “laborer and farmer”. The ship's manifest lists his destination as the Japanese Methodist Mission on Pine Street.

By 1910, Kayamori was living in Seattle's Welcome Hotel and working as a “cleaner and passer” at a dye works, according to census records. Around 1912, he moved to Yakutat, a small Tlingit village in southeast Alaska, where he worked in the Libby, McNeil & Libby fish cannery. Racist attitudes and active unions at the time ensured that the jobs available to Japanese immigrants on the West Coast were largely limited to agricultural, railroad, laundry and cannery work. After his father’s death, Kayamori’s mother went to live with her grandson’s family in Manchuria, then a Japanese colony. According to family members, Kayamori sent letters, money, pictures, toys and once a whole salmon packed in salt.

In Yakutat, children just called Kayamori “Picture Man”. For thirty years, he photographed celebrations, ceremonies, remnants of traditional Tlingit culture, and the growing influences of white society. Kayamori had a box camera with a hood, and a darkroom in his small house near the cannery on Monti Bay.

Yakutat’s exposed Pacific coastline made it vulnerable and U.S. military forces began to fortify the area as World War II escalated. Soldiers warned Yakutat residents to prepare for an attack. In October 1940, FBI director J. Edgar Hoover sent a letter to the bureau’s Juneau agent requesting the names of “persons who should be considered for custodial detention pending investigation in the event of a national emergency.” The reply included the name S. Kayamori and a description: “Is reported to be an enthusiastic photographer and to have panoramic views of the Alaskan coast line [sic] from Yakutat to Cape Spencer.”

A day before the Japanese bombed Pearl Harbor, Hoover wrote to the War Department’s military intelligence division requesting information on a number of individuals. Under Kayamori’s name the reply noted: “Reported on suspect list, Alaska.” After the bombing of Pearl Harbor on December 7, 1941, soldiers reportedly beat up Kayamori, a 64-year-old, 5-foot-3 photographer, according to a town resident. Locals say Kayamori knew he would soon be arrested. On December 9, he committed suicide in his home.

Under cause of death, his death certificate asks “Drug?” The doctor who responded to Kayamori’s death later wrote that he found evidence of an attempt to burn some documents. Locals say soldiers buried Kayamori across the bay, a site that was later paved for a naval ramp.

Such a sad story. I look forward to seeing Mr. Kayamori's photos. My father like Mr. Kayamori lived a comfortable life in his own home country the Philippines. Like Mr. Kayamori he worked for a while in a cannery in Alaska. He worked in Juneau where he met my mother who was Tlingit.