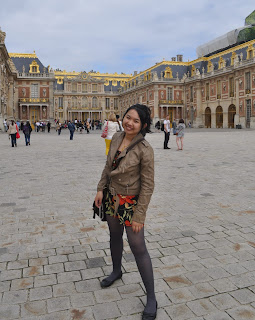 SHI welcomes our 2013 Visiting Scholar, Paphaphit Wanasuk of Oxford University, who is studying toward an MSc in Environmental Change and Management. She is conducting research for her master dissertation project, entitled “Can sustainable eco-tourism businesses be realized through local social entrepreneurship in Alaska Native communities, and if so how?” The goal of this research is to assess if a pathway to the sustainable eco-tourism businesses through social entrepreneurship approach can be achieved in Alaska. The theory of sustainability will be used to develop sustainable eco-tourism business practices in which she plans to extend the interpretation of sustainability concept with a bioregional and cultural perspective. Furthermore, she is also interested in researching the collaborative, networked social enterprise initiatives among tribes, corporations and local businesses to achieve optimal benefits from indigenous tourism in the region to enhance the sustainability and cultural diversity values. (Abstract) (Letter of Invitation)
Posted by SHI Archivist No comments: 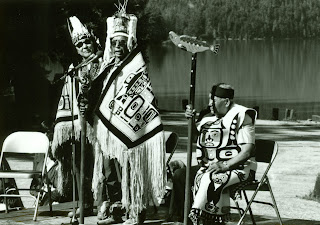 SHI has posted online an archival recording of a peace ceremony recorded in August of 1980 in Haines, Alaska. On that day, Austin Hammond (Gunx̱aa G̱uwakaan, Daanawáaḵ), clan leader of the Lukaax̱.ádi, gathered together the Tlingit and non-Native community to protest the mistreatment of the land and people of his ancestral homeland of Lḵoot, Haines, and to lead a G̱uwakaan Ḵoo.éex’, a Peace Ceremony. According to the film Haa Shagóon (Kawakey, 1981), Austin requested that “the peace rock, or ‘Deer Rock,’ G̱uwakaan Teiyí, broken into pieces by road builders, be made whole; that the fish weir be removed; that our sacred burial grounds be protected so never again will the bones of our ancestors lay scattered and disturbed; and we ask that we may lawfully catch salmon for our subsistence in this river, a heritage denied to us that is rightfully ours." The audio recording can be heard by clicking here.

This recording, which provides spoken Tlingit language content, followed by an English translation, is made available for study and research purposes, and especially for Tlingit language learners and teachers.

This recording and photograph was donated to SHI by Nora Marks Dauenhauer and Richard Dauenhauer.


Sealaska Heritage Institute is a private, nonprofit founded in 1980 to promote cultural diversity and cross-cultural understanding. The institute is governed by a Board of Trustees and guided by a Council of Traditional Scholars. Its mission is to perpetuate and enhance Tlingit, Haida, and Tsimshian cultures of Southeast Alaska.

This project was made possible through a grant from the Institute of Museum and Library Services. 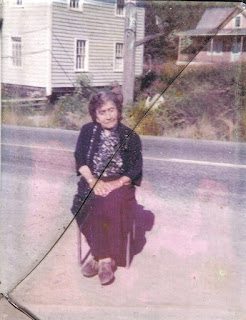 Sealaska Heritage Institute has just posted a recording of Tlingit elder Bessie Denny (1870–1973) telling stories in the Tlingit language with her son Henry Denny Jr. (1902-1979, Tlingit names Asdax̱aay, Gitx̱wán, and G̱ashéiḵsh IV) translating into English, recorded at Saxman, Alaska, February, 1966. (click here to hear the recording) This was a recording prepared for public use by and at the Alaska Native Brotherhood Grand Camp Convention in 1966. Bessie tells the history of the Saanyá Kwáan, the people of Cape Fox, which comprises the Neix.ádi, Kiks.ádi and the Teikweidí clans. She tells of the migration routes, place names and acquisition of crests. The stories are significant for the storytelling and capable translation of two master storytellers of the Cape Fox area in Bessie and Henry Denny; for an example the deep history of traditional Tlingit people’s connection to a place, where there is history and life in everything; and for an early recording of a master storyteller and historian in Bessie Denny.

The most well-documented Tlingit speakers were born from the 1890s and after. The texts transcribed and translated by the ethnographer John Swanton in Tlingit Myths and Texts (1909) represent part of the small handful of documentation from Tlingit speakers born earlier than the 1890s, and the oldest speaker from the modern era includes texts from Sally Hopkins (Sx̱aastí) documented in Anóoshi Lingít Aaní Ká: Russians in Tlingit America (2008, Dauenhauer), who was born in 1878. 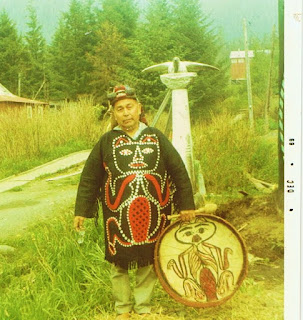 The recording presented here represents an earlier dialect than much of the extant documentation of Tlingit Elders. It is a rare recording from the older generation of Tlingit speakers, told in masterful detail and with brilliant visual acuity by Bessie Denny, and expertly translated by her son Henry. This recording was also selected especially for use by Tlingit language learners and teachers.

This recording was donated to SHI by Bessie Denny’s great grandson, Bruce Kelley.

This recording was made available online from a grant project supported by the Institute of Museum & Library Services (IMLS). 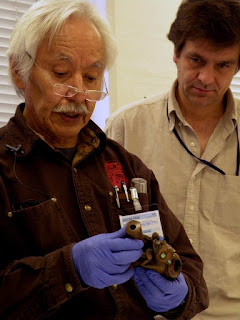 Sealaska Heritage Institute has recently made publicly available a documentary produced in 1974 on Tlingit artist Nathan Jackson, as he was commissioned to carve a wall screen for Harvard University's Peabody Museum. Narrated by SHI President Rosita Worl, the documentary showcases aspects of Northwest Coast art from the perspective of master artist Nathan Jackson. This video is from the Rosita Worl Collection, and can be accessed by clicking here.