Another significant manuscript collection was recently donated to SHI Special Collections, the papers of the late Emma Widmark, which contain her papers while she served in the Alaska Native Sisterhood (ANS).

Emma Georgenia Widmark (1940-2008) was born in to Dr. Alfred Widmark, Sr. and Carmel Demmert Widmark. Widmark’s father was of the Kaagwaantaan Clan and her mother of the L’eeneidí Clan. Widmark´s Tlingit name was Kinle. During her youth Widmark grew up in Klawock and , but later moved to in 1967, where she lived for the remainder of her life. After graduating from high school, Widmark enrolled in , but soon transferred to from where she obtained a B.S. Degree in Home Economics. She later earned a Masters of Education from .

Throughout Widmark´s life she remained a dedicated educator. She worked for the of as a Home Economist, and frequently traveled throughout rural for her work. Widmark was also very active in the Alaska Native Sisterhood, serving in various ANS ranking positions and as Grand President. Widmark also created the ANS Executive Committee newsletters, Executive Echoes, from the late 1990s to mid 2000s. She remained active in ANS and in her efforts to encourage education until her death in mid 2008. Recently, a biographical tribute on Emma Widmark was published in Kimberly Metcalfe’s new book In Sisterhood: The History of Camp 2 of the Alaska Native Sisterhood (: Hazy Island Books, 2008).

Concerning Widmarks papers, they were donated to SHI Special Collections by the heirs of Widmark's estate, via Edith Jacobsen, on Jan. 5, 2009. The papers comprise four boxes of materials concerning her work for the Alaska Native Sisterhood from the 1980s to 2007. The papers consist of her correspondence for ANS (1987-2007), newsletters of the ANS Executive Committee entitled Executive Echoes (1995-2006), meeting minutes of ANS Juneau Camp 2 (2000-2001), ANS Saxman Camp 14 (1999) and papers of the ANB and ANS Executive Committee. Overall, the material in this collection documents and provides great insight into the activities of ANS and the life of an accomplished and educated Tlingit woman. To view SHI's online finding aid for this collection click here.

SHI is a Native nonprofit organization established in 1980 to administer educational and cultural programs for Sealaska, a regional Native corporation formed under the Alaska Native Claims Settlement Act. SHI’s mission is to perpetuate and enhance Tlingit, Haida and Tsimshian cultures. SHI obtains its collections by donation and if you would like to donate, please contact SHI’s . SHI is working to collect ANS and ANB papers.

This historic photograph came with the donation of Widmark's papers and captures Tlingit elders and dancers in regalia, circa 1963, photography by Martin R. Strand, taken at Sitka. 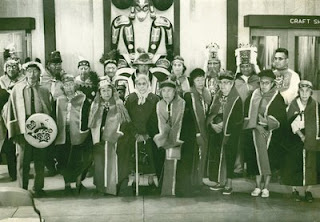