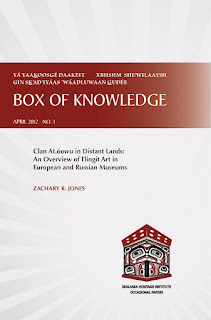 Sealaska Heritage Institute (SHI) has launched a series of occasional papers on Tlingit, Haida and Tsimshian studies in an effort to disseminate research more widely and to circulate work that has not been published.

The series, Box of Knowledge, will include essays or reports by researchers working with the institute, contributions prepared by external experts, and work by staff, said SHI President Rosita Worl.

“There’s a whole range of information that just never gets published, and usually they’re written on issues that have immediate importance. And we’ll be able to get that information out very quickly,” said Worl, noting that submissions also will be peer reviewed.

The inaugural paper was written by SHI Archivist and Collections Manager Zachary Jones. Clan At.óowu in Distant Lands is an overview of Tlingit collections held by museums in Europe and Russia, and it includes photos of pieces that many people likely have not seen before. (Download from here (16 MB)

“Essentially my paper breaks the ground in providing a documentation on where Tlingit art resides in Europe and Russia. It’s something that’s never been done before,” Jones said.

The paper includes a table showing museums that have Tlingit pieces and the approximate sizes of their collections. It also provides some details on the items plus a few photos, including an image of a very unusual war helmet depicting a woman wearing a labret. Jones hopes his paper will prompt people to do more research on the collections.

“Essentially these collections are very understudied, partly because of their distance and location. I hope my paper will contribute to further research on these collections and it can serve as a blueprint for anyone interested in documenting or studying Tlingit art in Europe and Russia,” he said.

The Jones paper includes photos commissioned by SHI of objects at the British Museum. SHI is planning to publish a book on that collection as part of its “visual repatriation” effort to document and show clan at.óowu held in museums around the world.

The series is available at www.sealaskaheritage.org. People who want to submit a paper for consideration should contact Jones at zachary.jones@sealaska.com or 907.586.9261. 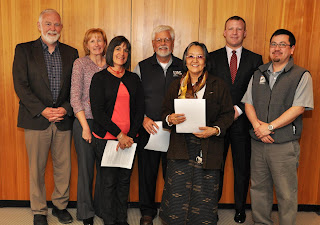 Sealaska Heritage Institute (SHI) has signed a memorandum of agreement (MOA) with the Juneau School District and University of Alaska Southeast, Juneau Campus, in an effort to increase the communication and collaboration among the organizations.

The organizations will work together through the William G. Demmert Memorandum of Agreement to provide enhanced cultural, instructional, academic, and career placement opportunity for Juneau’s students, said SHI President Rosita Worl, noting the MOA will be used to support, design, implement, and sustain existing and new projects and programs.

“It builds on the years of experience where we’ve worked together,” Worl said. “It’s formalizing our relationship and what we see for the future.”

“This MOA confirms some of the things we are doing now, but it also marks an era where we’re seeing a real shift in thinking,” Pugh said. “We’re going to commit to moving forward even further.”

“We’re very happy to formalize this,” Scandling said. “Sometimes I hear people say ‘Oh it’s just a piece of paper.’ And as a former teacher of history, I want to say ‘Well, so was the Constitution!’”

The first joint project under the agreement is scheduled in August in Juneau. Under the project, new- and first-year teachers at the district and the university will participate in Wooch Yax, a two-day orientation that will include an overview on Native cultures and history with an emphasis on integrating culturally-based curriculum and knowledge into the classroom. The term Wooch Yax is a Native value based on balance, respect and reciprocity and refers to working together.

Future projects may incorporate SHI’s resources, which include curriculum, books and a large digital archive of historical photos, documents and recordings. A number of the activities cited in the agreement will take place after construction of SHI’s Walter Soboleff Center, which will be built across from Sealaska Plaza on the lot formerly known as “the pit.”

The MOA is named for the late William G. Demmert, a Native teacher and administrator in Southeast Alaska schools who played a major role in shaping educational programs for Native Americans and Alaska Natives at the local, regional and national levels. He also served as a professor and dean at UAS, as a commissioner for the Alaska Department of Education, and as a trustee to SHI.

“He symbolizes for us the partnership that can be forged among educational institutions that have a direct impact on our children’s future,” Worl said. 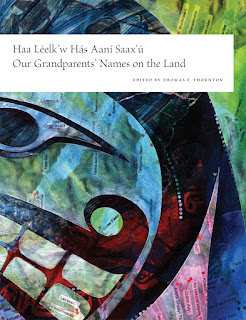 Nearly twenty years in the making, Haa Léelk’w Hás Aaní Saax’ú: Our Grandparents’ Names on the Land, is the most comprehensive study of its kind. It was compiled by Dr. Thomas Thornton in collaboration with hundreds of people, including area Tribes and Elders, under several grants administered by Harold Martin through the Southeast Native Subsistence Commission and Central Council of the Tlingit and Haida Indian Tribes of Alaska.

Many of the people who contributed to the book have since Walked Into The Forest, and if not for this research, the place names would have died with them, said SHI President Rosita Worl.

“If they had not begun this work twenty years ago we would not have the benefit of this vast knowledge,” Worl said.

The vast majority of place names in the book are of Tlingit origin. But there are also Haida place names, and some Tsimshian, Eyak, Chugach and Athabaskan names. The chapters are organized by kwáan, traditional community territories which roughly correspond to modern community areas. Each chapter includes a narrative and concludes with a map showing place name locations along with a table listing the Native names, translations and locations.

“There’s the literal translation and there are all of these associations that people are aware of. They can be historical events, they can be natural resources that are associated with the places, personal memories, clan histories, mythological events, all of those things are tied to place, and that was really the fundamental way that history was recorded,” Thornton said.

“It’s so much more than just a place name,” said Worl, who is Tlingit. “It’s tied to our social fabric, our social identity, our world view, how we see the world, how our ancestors were using different sites.”

For example, the English place name “Juneau” commemorates Joe Juneau, a gold miner. One of the Tlingit names for the Juneau area is Dzantik’i Héeni (Flounder at the Base of the Creek), the name for the area today known as Gold Creek, Thornton said.

“And the name— Dzantik’i Héeni —actually refers to the flounder that were said to be in the vicinity of the creek. And, again it’s a descriptive name and describes probably a subsistence activity that people engaged in,” he said.

Another major theme that arose from the research is the environmental change documented in the names. For example, the Tlingit name for Glacier Bay is Sít’ Eetí Geeyí, which translates as Bay in Place of the Glacier.

“In Tlingit it’s a much more descriptive name and it actually tells you about the geomorphological processes that are unfolding in Glacier Bay where the glacier is retreating and the bay is taking its place. So that to me signifies the capacity of Tlingit to describe geographic phenomena. And that’s evident all throughout the geographic nomenclature,” he said.

One story in the book recounted by Johnny C. Jackson of Kake tells of a great flood that forced people into the Interior. They migrated back several generations later after the water receded and even though many of the travelers had never seen their homeland, they were able to recognize places by the picturesque Tlingit names that had been passed down.

Thornton and local researchers collected the information in two ways: by recording names recalled by Elders in communities throughout Southeast Alaska over many years and by compiling place names documented in the past by scholars such as Frederica de Laguna and others. The names compiled by early chroniclers were often spelled in unorthodox ways, rather than in the common orthographies of today, making them difficult to decipher and re-elicit. That alone was a massive research task.

The book has received accolades from people, including Richard Dauenhauer, a prominent scholar of Tlingit history, language and culture. He called it “the first successful attempt to gather all the indigenous place names of Southeast Alaska.”

“It is the most complete list of all known place names collected and published to date. It is the new benchmark against which all future work will be measured,” said Dauenhauer.

“Restoring Tlingit place names and their meanings will root our people in place and decolonize the landscape, and Thornton has provided us with a fundamental tool to do exactly that. Sh tóogaa xat ditee—I am grateful,” said Lance Twitchell, a Tlingit language teacher at the University of Alaska Southeast.

The book includes a note to the reader by Harold Martin, who was instrumental in guiding the project through all stages and took an active role in the research process, and a foreword by Worl. It was co-published with the University of Washington Press (UWP) and received funding from the National Park Service Heritage Grant program, SHI, and Juneau resident Mike Blackwell. The cover art is by Clarissa Rizal and the book was designed and edited by Michael Travis. The book is available in paperback ($30) and hardcover ($60). Thornton will be in Juneau at noon on Friday, April 13, for a book signing in the lobby of the Sealaska building.