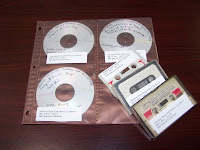 In regards to the recordings of Walter Williams, on these two cassettes Williams reads a story about the history of , then discusses this story and adds traditional information to the story from his Tlingit perspective. The third cassette by David and Annabell Peele contains stories about how Haida Indians entered , various histories of places, people, and clans, as well as a discussion of the Haida language. We at SHI Special Collections are very grateful to have these materials and to make them available to the public for educational purposes. These recordings have now been created and named the Wallace Olson Recordings Collection (MC 4).

Also of importance, upon donation SHI archival staff took steps to help preserve and make these recordings more readily available. The cassettes have been placed in a special archival box in our locked storage facility for care. Additionally, because cassette tapes and the quality of audio captured on cassette tapes can deteriorate over time, Special Collections staff had the audio recording transferred to CD format. To accomplish this we played the cassette’s audio through a special software program, enhanced the recording and eliminated background noise digitally, and then saved the improved recording on a CD. Now patrons can more easily listen to these recordings on CD and we can more readily make copies for interested patrons. We are proud to care for materials of this nature. SHI Special Collections obtains most of its collections through donation.