Selina Everson and Ethel Lund will give a joint lecture on Monday, Nov. 30, on the Alaska Native Sisterhood (ANS).

The talk is part of a brown-bag lecture series sponsored by Sealaska Heritage Institute to celebrate Native American Month.

The lecture is scheduled from noon-1 pm in the 4th floor boardroom in the Sealaska building in Juneau. It’s open to the public and free of charge. 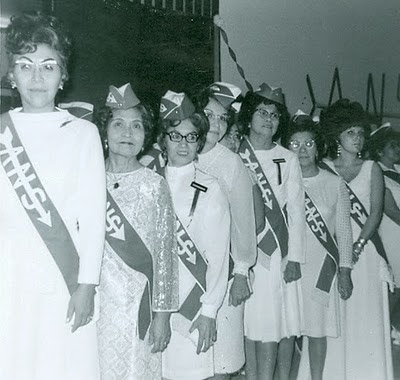 Daniel Lee Henry gave a lecture on Tuesday, Nov. 17, on nineteenth century encounters between Natives and non-Natives in Chilkat country in the Sealaska Building. The talk is part of a brown-bag lecture series sponsored by Sealaska Heritage Institute to celebrate Native American Month. Henry is an award-winning author, teacher and journalist based in the Haines area. He has recorded numerous oral histories of Chilkat/Chilkoot Tlingit Elders and is currently working on a rhetorical history of land use confrontation in the communities of the Northern Lynn Canal. 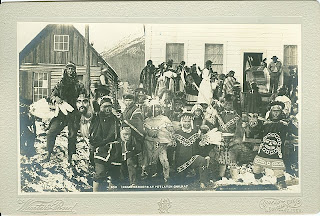 Cabinet card photograph of Chilkat Tlingit at Klukwan posing in regalia for a potlatch or event, by Winter & Pond, 1895. From the Richard Wood Photograph Collection, PO049, Item 68, SHI Special Collections.
Posted by SHI Archivist No comments:

For Native American History Month, on Wednesday November 4, 2009 Sealaska Heritage Institute Trustee and University of Alaska Anchorage Professor Jeane Breinig gave a presentation in the Sealaska Building on Southeast Alaska Native perspectives of Alaskan statehood. She spent countless hours doing meticulous research for her lecture, some of which was conducted at SHI Special Collections. Funded in part by the Alaska Humanities Forum and the Sealaska Heritage Institute, her research is part of a project entitled “A Retrospective Analysis of Alaska Statehood from a Native Perspective,” which seeks to shed light on how Natives across the state of Alaska reacted to statehood.

The Sealaska Heritage Institute recorded her hour-long lecture, which can now be viewed by the public via Sealaska’s website by clicking here.

Overall, Breinig’s lecture did a good job in addressing the complexities of how Southeast Alaska Natives grappled with statehood up to 1959, as well as balancing the direction that historical memory has moved since that time. Her arguments came down to a handful of complex points, some briefly summarized below. But for a full understanding of her arguments, interested parties are strongly encouraged to watch the lecture via the link provided above.

First, regarding some of Breinig’s findings, she discovered that historical records showed most Southeast Alaska Natives generally supported statehood, but only tepidly and if conditions for statehood favored—and didn’t hurt—Native land claims, subsistence rights, and other important aspects. Southeast Alaska Natives, through Alaska Native Brotherhood and Sisterhood’s efforts, the work of their lawyers William L. Paul Sr. and Jr., and the ANB attorney James E. Curry, had previously fought against some statehood bills that attempted to deprive Alaska Natives of land, most notably in 1950, but they did cautiously go along with the 1959 statehood bill—though most clearly had hoped statehood would have brought more to Alaska Natives (additional details on this are mentioned in Breinig’s lecture). In many ways however, although statehood did not resolve a number of important issues for Alaska Natives, it set in motion events that helped with the solidification of the Alaska Native Land Claims Settlement Act of 1971.

One important point made by Breinig that cannot be underestimated is the issue of fishing rights and subsistence. In many ways statehood for Alaska Natives revolved around land claims and subsistence. Breinig accurately noted how large corporate fish traps, which were run by lower-48 corporations that were protected by Federal laws while Alaska was a territory (and not a state), were vehemently opposed by most Southeast Alaska Native villages. Most villages were opposed to fish traps for many reasons, but one major reason revolved around the fact that fish traps affected subsistence fishing. These fish traps were taking fish from Southeast Alaska Native subsistence fishermen, causing food shortages in Native villages during the winter months. Not only were these fish traps enormous, they were very ecologically devastating to salmon populations and migration patterns. With fewer salmon in Southeast Alaskan waters, salmon migrations changing, and with laws that protected these fishing trap operations at the expense of Alaska Native subsistence needs, Tlingit, Haida, and Tsimshian saw statehood as a way to break corporate fishing powers. As Breinig noted, statehood broke the hold of corporate fishing operations in Alaska as state legislators were able to soon enact laws that banned fishing traps (since the state had jurisdiction over previously federally controlled fishing laws). So in some ways, through statehood Southeast Alaska Natives gained some ground in resolving subsistence problems of the period. Clearly however, the battle for Native subsistence in Alaska was not resolved with statehood, nor has it been resolved today, as Alaska Natives work tirelessly toward enacting political reform that will satisfactorily address the issue of subsistence. Overall, Breinig’s research shows the complex issues that moving toward statehood produced and how Alaska Natives dealt with these heavy issues.

Sealaska Heritage Institute (SHI) will sponsor a noon lecture series in November to celebrate Native American Month. The brown-bag lunch series will focus on topics such as Native history and languages, Native art and the statehood movement. “Native people have such a rich history in , but much of it is not taught in schools,” said SHI President Rosita Worl. “We hope to highlight our history in November in honor of Native American Month.”

Tlingit leader Byron Mallott will give a lecture on Monday, Nov. 2, on the development of Alaska Native corporations created under the Alaska Native Claims Settlement Act and the efforts by Alaska Natives to transform the corporations into “Native” institutions in the face of Congress’ competing intent to assimilate Alaska Natives economically through profit-making corporations. Mallott is the former CEO and President of Sealaska Corporation and serves as a Fellow with the First Alaskans Institute. He is the clan leader of the Kwaashk’i Kwáan Clan of Yakutat.

Jeane Breinig will give a lecture on Wednesday, Nov. 4, on Southeast Native perspectives on statehood. Breinig is an associate professor of English at the . Her teaching and research areas include American Indian and Alaska Native literature, American literature, and American ethnic literature. Her publications include articles and books documenting Alaska Native oral histories. She is Haida, originally from Kasaan, TáasLáanas, Raven Brown Bear.

Daniel Lee Henry will give a lecture on Tuesday, Nov. 17, on nineteenth century encounters between Natives and non-Natives in Chilkat country. Henry is an award-winning author, teacher and journalist based in the Haines area. He has recorded numerous oral histories of Chilkat/Chilkoot Tlingit Elders and is currently working on the book Dancing at Deer Rock: Toward Community Among Warriors, a rhetorical history of land use confrontation in the communities of the Northern Lynn Canal.

Wally Olson will give a lecture on Thursday, Nov. 19, on contact between Alaska Natives and European explorers in the late nineteenth century. Olson will show from specific events that most of the time the explorers (not always the fur traders later) and Native people got along well because it was a win-win situation. The explorers wanted information, and the Natives wanted trade goods, so they were "pragmatic partners." Olson is an author, a professor of Anthropology (Emeritus) with the and a Fellow of the American Anthropological Association.

Richard and Nora Marks Dauenhauer will give a lecture on Tuesday, Nov. 24, on relations between Russians and Tlingit from the 1790s through 1818, an era when Russians expanded into Southeast Alaska to take control of the fur trade. The Dauenhauers have written numerous award-winning books on Native culture and history, including Anóoshi Lingít Aaní Ká: Russians in Tlingit , The Battles of 1802 and 1804, winner of the American Book Award from the Before Columbus Foundation.

The lectures will be held from 12-1 pm in the 4th floor boardroom at in . Attendees are invited to bring their own lunch.