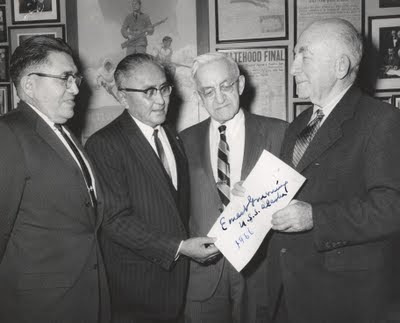 The Alaska Native Brotherhood Grand Camp has donated a collection of historical photos to SHI. The collection includes a number of great images showing ANB and ANS members. The collection also documents some important moments in history, such as ANB leaders including William L. Paul meeting with Sen. Ernest Gruening about the proposed land claims bill for the Tlingit and Haida. See them online!
Posted by SHI Archivist No comments:

Scientists have uncovered a stunning collection of stone artifacts at least 15,500 years old from a central Texas archaeological site, proving that people were living in North America thousands of years earlier than previously thought.

The discoveries, reported this week in the journal Science, provide dramatic evidence that people had colonized the middle of the continent long before glaciers melted back to create an ice-free migration corridor from Alaska through Canada.

The inescapable conclusion essentially rewrites the first chapter of Alaska’s prehistory and what’s known about the initial colonization of the New World. (click hear to read rest of the story)