Artistic Heritage & a Unique Object at the British Museum

One object and medium of special interest was a baleen box dated to 1868, modeled after the style of bentwood box. It was attributed as likely being of Tlingit origin by Nathan Jackson. (image of box below) The baleen is brown, either from the artist dying it, or was naturally that color (which would be unusual for a humpback whale, if the baleen is in fact from a humpback). Nathan Jackson had not ever encountered a baleen box, and was unfamiliar with artists using baleen in boxes. Nathan Jackson stated he was inspired to attempt carving and making a similar baleen box. SHI’s Native Artist Committee recently held a meeting, and issued the challenge to Tlingit, Haida, and Tsimshian artists to study, learn, and revive historic artistic techniques. 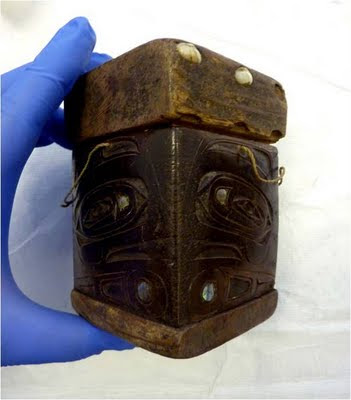 The Institute of Museum and Library Services is the primary source of federal support for the nation’s 123,000 libraries and 17,500 museums. The Institute's mission is to create strong libraries and museums that connect people to information and ideas. 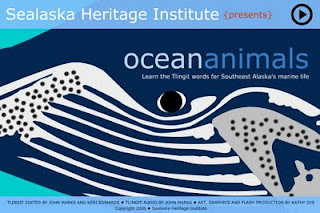 Sealaska Heritage Institute (SHI) oversees and cares for over 7,000 recordings that concern the Tlingit, Haida, and Tsimshian people, and seeks to make these materials available to the public. SHI regularly assists researchers and educators by providing access to our growing collection of recordings. While most of our historical recordings are not available digitally and online (though an inventory of our holdings is online), SHI has placed many language resources online. Many of these online language recordings assist with the language learning process. (click on image for example)

For those not familiar with Project Jukebox, their website states that the Oral History Program is part of Alaska & Polar Regions Collections of the Elmer E. Rasmuson Library at the University of Alaska Fairbanks. The program was established in 1981 to collect and curate audio and video recordings that relate to various aspects of Alaska's history and the people who have contributed to its rich heritage. The collection contains over 9,000 individual tapes, including interviews with politicians, pioneers, and Native elders. Key collections include "Alaska Native Songs & Legends" by the Alaska Library Association (searchable index located on ANKN site), "Early Day Alaskans" by the Tanana-Yukon Historical Society, "The Alaska Native Elders-In-Residence Program" by the UAF Alaska Native Studies Department, and "On the Road Recordings with Old Timers.”

“The Dry Bay Jukebox Project is the result of a collaborative effort between the traditional clans of Dry Bay (Gunaaxoo), the National Park Service (NPS), the National Forest Service (NFS) and the University of Alaska Oral History Office. The project was funded by the NPS, which currently manages a large portion of the traditional territory of the Gunaaxoo Kwáan, extending from Lituya Bay in the south through Glacier Bay National Preserve to the Alsek River in the north. Traditional Gunaaxoo Kwáan lands north of the Alsek River to the Italio River are presently administered by the Yakutat District Ranger's Office of the Tongass National Forest, which supported the project by providing transportation, professional expertise and access to many important places.”

The Dry Bay Project provides oral history information on the Tlingit habitation of the Dry Bay area and life in and around Yakutat, Alaska. Another segment of Project Jukebox also contains oral histories concerning Yakutat, which may prove of interest to researchers.

The Sitka National Historical Park Project is, according to the Project Jukebox website,

“comprised of fourteen oral history interviews, photographs, and a walking tour of the Russian Bishop's House. It is designed to provide an overview of the Sitka National Historical Park; its history, its facilities, and its importance to members of the Sitka community. This project was created to let Sitkans explain in their own words what the park means to them. It offers a wonderful perspective on "the meaning of place" to a community.” 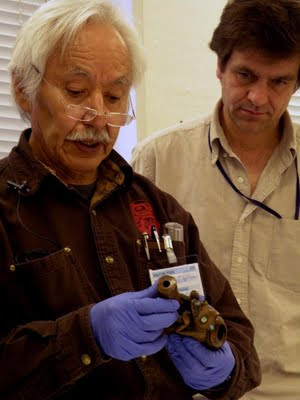 The Institute of Museum and Library Services (IMLS) and SHI sponsored a trip to the British Museum in April to document and study their Southeast Alaska Native objects. Staff was accompanied by the famous Tlingit carver Nathan Jackson, who closely examined the pieces and gave information about them. SHI plans to publish a book on the collection.
Sealaska Heritage Institute is a Native nonprofit established in 1980 to administer educational and cultural programs for Sealaska, a regional Native corporation formed under the Alaska Native Claims Settlement Act. The institute’s mission is to perpetuate and enhance Tlingit, Haida, and Tsimshian cultures.

The Institute of Museum and Library Services is the primary source of federal support for the nation’s 123,000 libraries and 17,500 museums. The Institute's mission is to create strong libraries and museums that connect people to information and ideas.
Posted by SHI Archivist No comments: