Recordings Documenting the History of Wrangell Tlingit Come to SHI 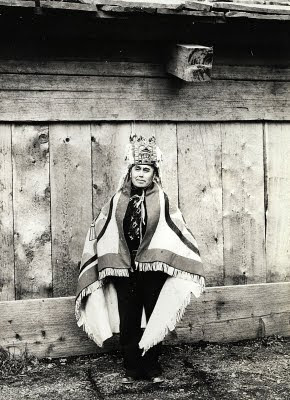 Recently a set of important recordings documenting the history of the Wrangell Tlingit were donated to SHI. This set of nine recordings, which contains words by Tlingit artist and Raven Kiks.ádi elder Thomas Ukas (1879-1973) and his son Harry Ukas (1915-1993), was donated by Thomas Ukas’ granddaughter and longtime supporter and trustee of SHI, Ethel Lund.

The recordings contain information on various topics relative to the Wrangell Tlingit, such as information on the history of the Wrangell Kiks.ádi Clan and oral history accounts about Tlingit and Russia relations at Wrangell prior to 1867. Many people, including SHI’s incoming Visiting Scholar Emily Moore, would also be interested in Thomas Ukas’ words about his involvement with an emergency relief program called the Civilian Conservation Corps (CCC) during the 1930s and his restoration work on the Wrangell Totem Park and Chief Shakes Clan House.

The restoration work on the Wrangell Totem Park and Chief Shakes Clan House was part of a wider undertaking when the federal government, acting through the U.S. Forest Service and the Civilian Conservation Corps (CCC), hired Tlingit and Haida men to restore or replicate nineteenth-century totem poles from Native villages and repair historic clan houses. The artistic work on these parks and houses represent the first major act of government patronage for Tlingit and Haida art in the United States, and the totem parks and clan houses continue to be important sites for Tlingit and Haida communities today. During this period the Civilian Conservation Corps (CCC) created totem parks at Saxman, Ketchikan, Wrangell, Kasaan, Klawock, and Hydaburg, and the already existing Sitka Totem Park received restoration work. Two clan houses were also renovated as part of this undertaking, including the Chief Shakes Clan House in Wrangell and Son-I-Hat Whale House at Kasaan.

Overall this new collection housed at SHI is available for study for educational purposes and it documents the important role Alaska Natives play in Alaska’s history, present, and future.

A link to the finding aid for the Ukas Recordings Collection can be found by clicking here.

Editorial by Cyril Zuboff in The Voice of the Brotherhood, 1960

This editorial by Cyril Zuboff was originally published in The Voice of the Brotherhood, a newsletter of the Alaska Native Brotherhood, in October, 1960. According to Cyril Zuboff’s (1892-1968) obituary in the Juneau Empire, he was born in Killisnoo, moved to Sitka as a small boy to attend the Russian Mission, and as an adult lived in Juneau. He was a member of the Alaska Native Brotherhood, Camp No. 7 at Angoon, AK. He was an executive member and Grand President of ANB six times. His Tlingit name was Eech T’éi, and he belonged to the Dakhl’aweidí clan and the Keet Hít, the Killer Whale House, of Angoon (Thanks to Harold Jacobs for this information.).

I find this historical document important because Zuboff articulates very soundly how the Alaska Native Brothorhood was successful in integrating older and younger generations, and, like a great orator as his ancestors were and as he must have been, he powerfully combines a rational appeal and a historical perspective with an emotional appeal of Brotherhood solidarity.

Cyril Zuboff at the Wrangell ANB/ANS Convention in 1946. Photo by William Paul, Jr.

The financial standing of the Brotherhood is lower this year than it ever was in the past.

You may rightly ask, “Why?”

I can tell you the recent poor fishing seasons were not the cause. We’ve had hard times before, but the Brotherhood was always able to have money coming in from the camps. But the ANB was never so poor as it is today.

From our beginning 48 years ago we have always advocated giving our younger generation a chance to run the local camps because our founders realized that the youth of today would be our leaders of tomorrow. However, at the same time the “senior members” — men and women who stood shoulder-to-shoulder with the Brotherhood when the need came to send an ANB attorney to Washington, D.C.

How many of you recall the battles, dark days and victories of former years? Do you recall when we sent legal aid to the nation’s capital on the matter of fish trap abolishment; the Wheeler-Howard Act for Alaska; when some of our people were refused the right to cast a ballot; when our children were barred from public schools; when our widows and destitute children were barred from receiving help by territorial law; and when there were signs in many businesses in Alaska that proclaimed, “White Trade Only”?

And then in 1939 when legislation was introduced in the territorial Senate to “prohibit the sale… or give Indians, Eskimo, Aleut… intoxicating beverages,” and then the discrimination law. Yes, there were these and many more.

These obstacles were met by our “senior members.” Men who, in many cases, could barely read or write the English language, but who were blessed with the brains of our ancestral Indians. These soldiers in our battles were sincere, powerful, honest, and yet humble.

They were always seeking the betterment of our race and to educate our children. Yes, they never lost sight of the virtues and teachings of the past but they realized the importance of providing education for the newer generations. They said, “They must be educated because they will take our place as leaders.. they will be like ‘channel lights’ in a storm… we will depend upon them, for we are all Christian soldiers united in harmony.”

The “senior members” dug deep into their savings in camps from Yakutat to Saxman to finance the Brotherhood and its programs.

We are urgings, dear sisters and brothers, please don’t sidetrack the “senior members” — the ANB-ANS needs them. Some must come as delegates to the convention, others should have positions of responsibility in our local camps. Younger generation and elder statesmen alike have a common meeting place in the Brotherhood.

Together in Brotherhood we can accomplish the goals laid out by our founders and recapture glories of past years.

Thanks very much to Ben Paul for use of the Cyril Zuboff photo, and to the Sealaska Heritage Institute and archivist Zachary Jones for archiving these important documents. 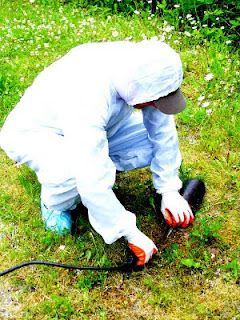 The Organized Village of Kake (OVK) with the assistance of the Sealaska Heritage Institute (SHI) diffused the historic Civil War Parrott Shell ordnance that a Kake family had passed among family members for decades.

“It has been in our family over 100 years,” Kake elder Michael Jackson said when State Troopers and Elmendorf Air Force explosives experts had first traveled to Kake to investigate the shell on June 23, 2011.

The Air Force x-rayed the contents at that time and had the ordnance placed in a safe building in Kake until it could be diffused.

The ordnance could have created a crater about four or five feet in diameter if it exploded.

The diffusion of the ordnance coincided with the OVK 23rd Annual Culture Camp for the Kake youth, and information was shared with the older overnight campers, ages 13-18, and community members the evening of July 14.

“This is the first time we’re bringing it out in public,” Jackson told the youth. “We know you guys are interested in history because you’re learning how to be Kake people, Keex’ Kwaan. You’re part of the ancestry that the U.S. Territorial Army came across. And that they had an encounter with us, a violent one. But it’s part of our history, it’s part of our healing.”

Since the shell was made inert, other Kake community members have shared where other shells are located. Another Parrott shell was donated by a Kake descendant to the Alaska State Museum in Juneau.

The OVK and Kake want to share the shells and their history, working in partnership with SHI, to other communities and the State of Alaska. 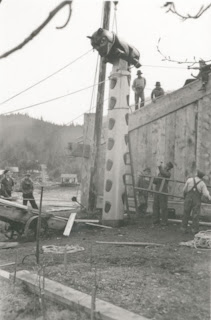 In August SHI’s newest Visiting Scholar, Emily Moore, Art History PhD candidate at University of California Berkeley, will begin her studies and fieldwork at SHI. Moore is conducting research on the totem parks of Southeast Alaska. These totem parks, located at Saxman, Ketchikan, Wrangell, Kasaan, Klawock, and Hydaburg, were constructed during the 1930s during the Great Depression (excluding Sitka’s pre-existing park, but it also received restorations during this period).The totem parks were created when the federal government, acting through the U.S. Forest Service and an emergency relief program called the Civilian Conservation Corps (CCC), hired Tlingit and Haida men to restore or replicate nineteenth-century totem poles from Native villages. The parks represent the first major act of government patronage for Tlingit and Haida art in the United States, and the totem parks continue to be important sites for Tlingit and Haida communities today.

Moore is interested in contacting carvers or their relatives in Tlingit and Haida communities who remember someone who worked on the New Deal totem parks, or details concerning the carving project, as Moore also works to honor the individual carvers who worked on this historic project and the project’s legacy.

If you are interested in being interviewed, or if you have additional information about the carvers, the totem parks, or other factors relative to Moore’s research, please contact emilylmoore@berkeley.edu. Moore will research this topic in SHI’s office from August 29-September 23, 2011. 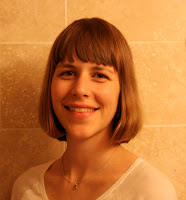