There are a number of individuals associated and credited with the Human Rights movement in Alaskan history. These range from individuals such as Frank Johnson’s 1930 boycott of segregated theaters, Bessie Quinto’s tireless advocacy toward equal pay and benefits for Natives working in salmon canneries, William L. Paul’s fight for Native rights and land, to Roy and Elizabeth Peratrovich’s ANB and ANS leadership during the passing of the Anti-Discrimination Act of 1945. Another name that should be spoken of alongside with these individuals is Amy Hallingstad.

Amy Booth Hallingstad (1901-1973) was born in Haines, Alaska, the daughter of Frank Booth Sr. (1889-1964) and Sally Jackson (1885-1943). Amy was Tlingit of the Eagle moiety, Tsaagweidí Clan. She is often remembered as a Human Rights activist and leader in the Alaska Native Sisterhood, and was referred to by some as the First Lady for the First People. She was widely known for using her quick wit and humor to make her point, and her jokes are often retold to this day during joking sessions in traditional gatherings.

In Amy's youth she moved to Sitka to attend the Sheldon Jackson College, and then moved to Petersburg, Alaska. During the 1920s in Petersburg, Amy married Norwegian-born Casper Hallingstad Sr. (1901-1980) and they later raised six children together.

During the early 1930s, as Amy's children began to attend school in Petersburg, Amy became angry that the Native children in Petersburg were forced to attend a segregated school. Since Alaska Natives had to pay taxes that went toward the public school system, Amy was able to force the closure of the Native school in Petersburg and soon Alaska Native children were able to attend the public school in Petersburg. Her oldest son, Casper Hallingstad, Jr. was the first Alaska Native student in the Petersburg public school. During this time Amy became very active in the Alaska Native Sisterhood (ANS), serving in various leadership roles within the Petersburg ANS Camp 16, and later serving as Grand President from 1947-49 and 1953-56. She was a supporter of the land claims movement as early as 1937. Amy was also instrumental in forming the Petersburg Indian Association in 1948.
During this time Amy also made it a practice to forcibly remove signs from businesses in Southeast Alaska that contained discriminatory language, such as "No Natives Allowed." Amy was also an organizer of boycotts against businesses that discriminated against Alaska Natives, or preferred to hire non-Natives. Newspaper articles speak of her efforts of enforcing a boycott of the Petersburg movie theater, which had segregated seating. The boycott continued until the segregated seating practice was eliminated.
As Grand President of ANS she also made strong efforts to pressure businesses, such as canneries that sought to employ non-Natives, to change their policies and hire locally. She influenced reforms that were enacted at canneries in Hood Bay, Excursion Inlet, Pillar Bay, and Chatham. She fought to improve medical care to Alaska Natives. She also regularly corresponded and met with state politicians about the important political issues of the day. With her contemporary, the celebrated Elizabeth Peratrovich, they both worked towards ensuring Human Rights were guaranteed to Alaska Natives. Amy was an advocate for Native rights until her death at age 72 in 1973.

Recently the decedents of Amy donated some documents and family memoirs about Amy to SHI’s archival collection, which is available to the public for educational purposes and study. (click here for description of collection) Within SHI’s other collections, some additional documents connected to Amy can also be found. Recently, researcher Ishmael Hope was studying SHI’s Curry-Weissbrodt Papers and came across a letter composed by Amy in 1947 discussing Native rights and the issue of land claims. She composed this letter while serving as Grand President of the Alaska Native Sisterhood. A quote from this letter was recently featured in the Sealaska Corporation’s special annual report, which focused on the Alaska Native Claims Settlement Act (ANCSA). Below is the quote from this letter and used in this report.

“We have decided that the real reason why our possessions are being taken from us is that we are human beings, and not wolves or bears. The men from Washington have set aside many millions of acres on which wolves and bears may not be disturbed, and nobody objects to that. Perhaps if we were wolves or bears we could have just as much protection. But we are only human beings. There are no closed seasons when it comes to skinning Alaskan natives.”
This important quote, and the words of Amy’s entire letter, is something that provides great insight and context into the fight for civil rights and land claims. Below is the full text from Amy’s 1947 letter.

All in all, there are many individuals who fought for Native Rights, Human rights, and land claims during Alaska’s history. SHI seeks to collect historical materials documenting this and connected topics, including recordings, photographs, and manuscript papers—such as diaries, letters, and meeting minutes. 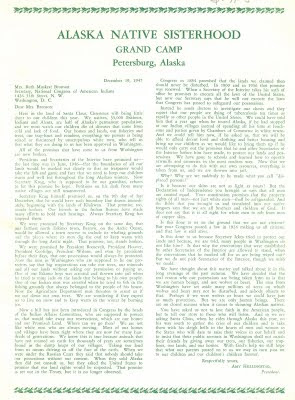