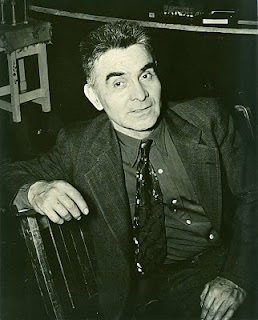 SHI Special Collections recently obtained a large and very significant archival collection documenting the history of the Tlingit and Haida people. The fifty-five box collection consists of papers relating to Andrew P. Hope (shown in photograph) and Ellen Hope Hays' activities in various Alaska Native tribal, community, and civic organizations between 1947 and 2002. The collection contains detailed materials documenting the activities of the Central Council of the Tlingit & Haida Indians of Alaska (CCTHIA) and the history of the Alaska Native Claims Settlement Act of 1971.

Andrew Percy Hope (1896-1968) born in Killisnoo, Alaska, the son of Percy L. Hope and Mary Williams, and was a Tlingit activist, community leader, tribal leader, and politician. He was of the Eagle moiety, Kaagwaantaan Clan, and of the Eagle Nest House. His Tlingit name was Kaa.oosti. After spending his early childhood in Killisnoo and Angoon, he moved to Sitka to study at the Sheldon Jackson School, and later studied carpentry and boatbuilding at the Cushman Indian School in Tacoma, Washington before obtaining his diploma. In 1912 Hope married Matilda `Tillie´ Howard (1896-1975) of Sitka, who bore Hope 14 children. Howard was a Raven of the Kiks.adi Clan, Point House.

Hope was "an early member and organizer of the Alaska Native Brotherhood" (ANB), served as President of ANB Grand Camp for several terms (his first term began in 1922), and remained active in ANB affairs until his death. (Dauenhauer, 1994). From 1924 to 1936 he served on the Sitka City Council, and from 1945 to 1953 and 1957 to 1963 Hope served in the Alaska Territorial House of Representatives and State Legislature. For twenty-six years (1940-1966), he served as the president of the Central Council of Tlingit & Haida Indians of Alaska, a federally recognized tribal government. He was also active in other national and state organizations, and was a member of the National Congress of American Indians and active in Alaska Federation of Natives. He died in Sitka in 1968.

Ellen Hope Hays is the daughter of Andrew P. Hope (1869-1968). She is a Tlingit Indian activist, community leader, and cultural educator. She is of the Raven moiety, Kiks.ádi Clan, and of the X’aaká Hít (Point House). Her Tlingit name is Yaa Yeil Tin. She obtained her basic education from Sheldon Jackson Boarding School in Sitka. Early on she became active in Tlingit affairs at Sitka. She joined the Alaska Native Sisterhood, worked for the Bureau of Indian Affairs, worked for the National Park Service, became superintendent of the Sitka Totem Park, worked for the Central Council of Tlingit & Haida Indians of Alaska, and became active in the Alaska Federation of Natives. As of 2010 Hays resided on Bainbridge Island, Washington.

Ellen Hope Hays was also interviewed about her life and work as part of Alaska’s Project Jukebox, and the audio for her interview can be listened to by clicking here.

Overall, this collection documents the activities of these two individuals, and others who worked for the same causes, as they sought to support and fight for the rights of Alaska Natives. To view a descriptive inventory of the collection’s contents, click here. The collection is open to public research for educational purposes.

Hello folks! Good blog. I know there are a lot of documents from Andrew "John" Hope Jr., Kaalgéik'w of the X'aaká Hít of the Kiks.ádi. He went by John. There is a lot from his work with the National Congress of American Indians, for example. Gunalchéesh. - Ishmael Hope, Khaagwáask', Angalook