A Southeast Alaska radio station has donated to Sealaska Heritage Institute hundreds of audio recordings dating from the 1960s to the 1990s.

The collection donated by KSTK-FM documents the history and events of the community of Wrangell through interviews and talk shows over the years, said SHI Archivist and Collections Manager Zachary Jones.

The recordings touch upon topics of interest to the Native community and the community as a whole, Jones said. 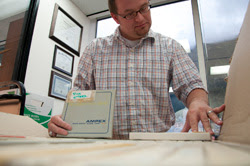 The recordings will be of use to anyone interested in studying Southeast Alaska. The recordings cover a broad range of topics, including cultural, historical and even ecological information, said Jones.

The donation brings another vital resource that will allow SHI to continue its work in writing tribal histories from the words of those who were part of Native history, said SHI President Rosita Worl.

“The public, including Natives, grew up without the benefit of learning about Native history since it was not taught in school. It is as if Natives had no history. This collection will help fill this gap,” said Worl, adding she is also hopeful that this collection and other collections in SHI’s archives might encourage Native students to become historians since at the present time we do not have a single Native historian.

SHI Trustee Ethel Lund, who is from Wrangell, was excited KSTK made the donation to the institute, saying there is very little documentation on Wrangell consolidated in one public facility.

“Most of our history is scattered in different homes and the documentation is not centered in one place like this will be at SHI, where it will be accessible to us,” Lund said.

The recordings are on approximately 200 reels and must first be digitized for use by patrons of the archive, which is located in Sealaska Plaza and open to the public.