Estimated reading time: 3 minutes, 12 seconds
The Tlingit people of Southeast Alaska no longer practice shamanism, but elements of it still exist in their culture today.
That’s according to Anthropologist 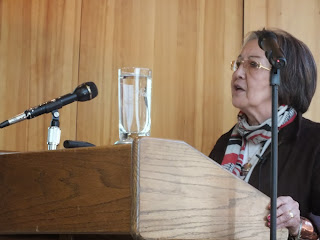 Worl says shamanism used to be a major component of Tlingit life. She says every clan had a shaman before Russian and American colonization largely forced the Tlingit people to abandon their traditional religion.

“Shamanism is generally associated with hunting, fishing and gathering societies that often migrate with seasons to follow their food sources,” says Worl. “To bring food, health and protection from evil, shaman seek connections with animal powers through their rituals.”

Worl says the shaman’s responsibilities included maintaining the well-being of the clan; acting as a military advisor; assuring hunting and fishing success; predicting future events; and curing illnesses. To do that they performed rituals designed to ward off hostile and dangerous spirits, and call upon good spirits to support the clans’ welfare.
Worl says Tlingits believed that great shaman traveled in both the physical and spiritual world, and that spirits chose certain people to be shaman.

“The majority of spirits with which the shaman makes his alliances are animals, animal spirits,” she says. “This reflects a widespread belief by cultures that practice shamanism that animals inhabited the world long before human beings and are essential to people because of the unique knowledge that animals possess.”

She says Tlingit clans last practiced traditional shamanism in the 1950s, but she argues it still pervades the rituals and beliefs of Southeast Alaska Natives today. For instance, Worl says Tlingits – including the late-Reverend Dr. Walter Soboleff – still believe that all objects possess some sort of spiritual essence.
“I’ve had meetings here in this room, where people like our spiritual leader, Dr. Soboleff, has pounded on the table and says, ‘Everything has a spirit! Even this table has a spirit!’” Worl says, pounding her own fist on the podium.
About 15 years ago at a clan conference organized by the heritage institute, Worl says several elders attributed modern social problems, such as alcoholism and suicide, to Tlingit societies being out of balance.

She says that discussion led to some of SHI’s most successful cultural programs.
Worl says the influence of shamanism on modern Tlingit life is perhaps most evident in the use of sacred objects and regalia in ceremonial acts, including memorial celebrations.

“When our ceremonial and sacred objects are brought out and the spirits are addressed or called upon in the same way as they were in earlier times,” she says.

Worl says many Tlingit elders are reluctant to discuss shamanism, perhaps due to the punishment Native people endured at the hands of colonizers for practicing their religion.
She says its unlikely traditional shamanism will ever be completely revitalized, but some Tlingits are looking at ways to incorporate more of the old practices in modern ceremonies.
The next talk in SHI’s Native American History Month Lecture Series happens Tuesday at noon. Professor Alan Boras of Kenai Peninsula College gives a lecture on “Salmon and Indigenized Orthodoxy on the Nushagak River.” The theme of this year’s series is Native spirituality.