Estimated reading time: 2 minutes, 15 seconds
Most Northern Native people have had their traditional spirituality squeezed out of them.
That’s according to Jana Harcharek, director of the North Slope Borough School District’s Iñupiaq Education Department. 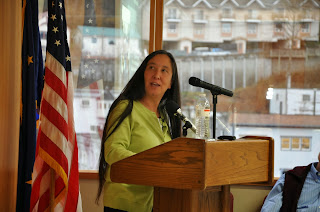 She spoke Nov. 12 as part of the Sealaska Heritage Institute’s Native spirituality lecture series.
Harcharek told her audience that her culture, including its spirituality, was almost destroyed by churches and schools.
“As has been the case with many indigenous peoples across the world, the attempt through education was to assimilate the Iñupiaq into mainstream society. And a variety of methods were used, including the oppression of language, the oppression of spiritual beliefs, the oppression of song and dance, which resulted in varying degrees of success on their part,” she said.
That led to pressure on the school system to teach what many had lost.
“It’s their birthright to know their history. And as a school district, we had been depriving them of their history. And through the loss of our storytelling, we had been deprived them of our creation and origin stories,” she said.
Harcharek said about six years ago, educators decided to reach out. They traveled to North Slope communities to confer with elders. (Link to the North Slope Iñupiaq Education Department.)
“We were able to go back where we had been, before schools were ever established, before missions ever came to the arctic, and confer with our elders about how it is and what it is that we did to instill beliefs, to instill the sense of being a contributing member of society, before schools ever came,” she said.
An Iñupiaq education initiative was formed. It included a cross-generational panel that came up with what a young adult should know about their people’s spirituality, culture and history.
It also included contemporary Native history and roles in a modern world.
New curriculums were developed, and continue to be added to students’ class work.
Harcharek said that includes training for new teachers without an understanding of the culture.
The program has not been without controversy, since some see it as going against Christian values. She said that’s not the case.
“We’re not preaching – or teaching – kids how to be shamans. In the same way that in school we don’t teach children how to be a Catholic or a Muslim or a Hindu,” she said.
Harcharek said the program teaches students about traditional spirituality and they make their own choices.
Posted by SHI Archivist