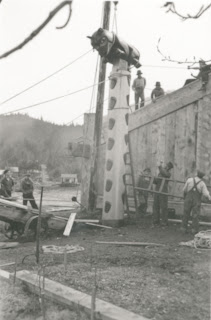 In December MRV Architects of Juneau generously donated a very significant photograph collection to SHI Special Collections Research Center (SCRC). MRV has a history of specializing and offering its services to the Southeast Alaska Natives, and are currently working with the Kasaan Haida Heritage Foundation to restore the Chief Son-I-Hat Whale House. MRV chose SCRC because they wanted to place these photographs with an organization that would preserve, protect, advocate the importance of, and allow patrons of all backgrounds to learn from these historic images. Amounting to around 150 black and white images, these photos document the work of architect and Alaska Native arts advocate Linn A. Forrest (part-founder of MRV Architects). To view a selection of these images click here.

In the late 1930s the U.S. Forest Service contracted regional architect Linn A. Forrest, based out of , and regional forester, B. Frank Heintzleman, to oversee various Civilian Conservation Corps (CCC) operations to restore and preserve totem poles and traditional Native architecture. From 1937 to 1939, and via a $24,000 U.S. Government grant to the Alaska Native Brotherhood as a CCC project, Forrest oversaw the construction of the Shakes Island Community House and totems at . In 1939 he also oversaw totem pole restoration work at the . Although Forrest was involved in a number of other similar projects, the photographs donated to SCRC document these two projects. The bulk of the photos show construction work on the Shakes Island Community House from beginning to finish and contain snapshots of the dedication celebration at the completion of the house.

Through these and other efforts Forrest become highly involved in local Native life and later wrote a book about his experiences, The Wolf and the Raven: Totem Poles of Southeastern Alaska, popularity for which has led to it being republished in over twenty editions. This donation is a significant addition to SHI SCRC and documents an important era of Native life. Those interested in viewing these items should prearrange an appointment with SHI’s archivist. Those interested in donating similar items should also contact the archivist.

Note: This story was recently covered by the Juneau Empire; please click here to read it.