We recently obtained two new historical photographs for inclusion in our archive; one of circa 1899 and another of a scene at Killisnoo circa 1900. We obtained these photographs from local collector of rare Alaskana, Richard Wood, who operates the Alaska Heritage Bookshop.

When we made contact with a person at the Cape Fox Village Special Collections about the first photo, they were quite excited about it (shown below). Our contact reported that this photo was likely from the Harriman Expedition in 1899. They reported that “if you look near the center where the house that does not have a front....where you see just the frame....well that house was the Xoots.hit (Brown Bear House) of the Teikweidí Clan Leader Thomas Johnson. If you look real close you can see the Teikweidí pole in front of it. You can see the bear cubs climbing down the pole.” Since the Brown Bear is one of the Teikweidí crests, it’s known to belong to the Teikweidí. Sadly the Harriman Expedition removed many items from , including totem poles, and the pieces later ended up in museums. Since then many of these items have been repatriated to under the Native American Graves Protection and Repatriation Act and returned under the 2000 Harriman Expedition Retraced. This photo is important because it shows what the village looked like before the Harriman Expedition removed various totems and items. 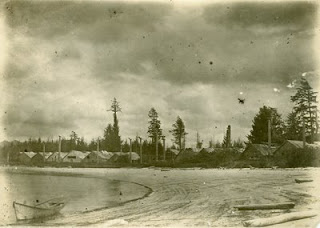 The second photograph shows an interior view of “Capt. Jake’s” house at Killisnoo. Kitcheenault or Kichnaalx was Jake’s Tlingit name. He was from the Deisheetaan clan of Angoon, but he was also known as Saginaw Jake, Chief Jake, and Killisnoo Jake. Jake was a policeman at Killisnoo for a number of years and involved with the US Navy, and his uniforms are visible in this photo. Many photographs were taken of Jake by professional photographers around the turn of the 20th century with images of Jake posing in his uniforms. To view some of these photos go to the Alaska’s Digital Archives and type in the keyword “Jake”, click search, and a numerous will appear. The photograph we obtained was taken by professional photographer Frank La Roche and is interesting because it shows how Jake displayed his traditional regalia alongside his American uniforms. There are many pictures in circulation of Jake wearing this regalia and uniforms, but this may be one of few ever taken of his regalia and uniforms displayed as a whole. A biographical and historical essay was published on Jake and is cited as Robert N. DeArmond, "Saginaw Jake: Navy Hostage, Indian Policeman, Celebrity" Alaska History 5, no. 1 (Spring 1990). Because the navy failed to pay a dept owed to the Deisheetaan, they adopted the naval uniform as a crest and Haa At.óowu (Clan Property). Overall, SHI Special Collections was pleased to obtain these unique photographs for inclusion in our archive. For more information about additional historic photos held by SHI Special Collections click here to see our digital displays. 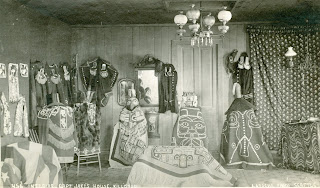