Sealaska Heritage Institute (SHI) has transferred forty audio and visual recordings dating to between 1965 and 1975 to CD and DVD. The change means the public may now peruse the recordings, which had previously been off limits due to their obsolete format. 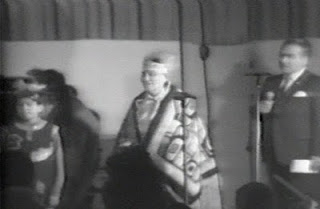 “Since we’ve been able to reformat them and make them available in DVD or CD, it makes them accessible for the public,” said Zachary Jones, archivist at the institute’s Special Collections Research Center. “People can now learn from these and use them, and they can be great educational tools.”

“People are dancing, they’re singing their clan songs, they’re doing these things for their descendants and for their people so they can learn and know these things,” Jones said.

“They talk about the culture and tell things that are important to the Tlingit heritage,” Jones said.

The recordings were all on open reels of film: seventeen were audio-visual and twenty-three were audio recordings. The transfers were made by Preservation Technologies, L.P., which specializes in care and preservation of recordings. The institute will also keep uncompressed digital copies on a portable hard drive for preservation purposes. A sample of one film concerning a Kake totem raising can be viewed by click here.

The institute has expanded its holding facility through grants and donations from Sealaska Corporation, the Rasmuson Foundation and the Institute of Museum and Library Services. SHI enlarged its facilities to accommodate a growing number ethnographic collections and archival materials acquired in recent years. The institute employs a professional staff to care for cultural objects and archival materials. Staff hopes to eventually have additional space for public exhibitions of its collections.

The Special Collections Research Center is open to the public 8:15-4:15 pm, Monday-Friday (closed noon-1 pm). It is located on the third floor of Sealaska Plaza.

Sealaska Heritage Institute is a Native nonprofit established in 1980 to administer educational and cultural programs for Sealaska, a regional Native corporation formed under the Alaska Native Claims Settlement Act. The institute’s mission is to perpetuate and enhance Tlingit, Haida and Tsimshian cultures.