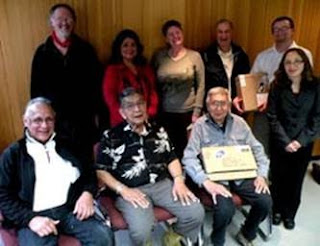 The recordings, which have been digitized, include interviews with many Native Elders and leaders, including Cy Peck, Sr., Matthew Fred, Austin Hammond, Charlie Jimmie, and Walter Williams to name a few.

“I think it’s found a home here,” said Peck at a recent ceremony in Juneau where the collection was formally presented to the institute. “I want everyone to know where to come and hear the Elders speak in their original way they spoke at potlatches and ceremonies and honoring people.”

The collection consists of mostly audio recordings that date to between 1978 and 1985 and document the fledgling First American Emphasis Week, a celebration of Native cultures recognized in places throughout the country. The Johnson O’Malley Program (JOM) joined with the Indian Studies Program to celebrate the event for the first time locally in March of 1978, and the organizers were overwhelmed by an unexpected, huge turnout of Native people, who came from across Alaska and the Lower 48, said former JOM Project Director Sharon Vavalis-Olsen.

It was during that time—when Peck had access to Native people from across the region—that the recordings were made. The recordings were broadcast locally, then flown to Fairbanks and broadcast there, said Peck, adding the event wouldn’t have happened without help from many volunteers, organizations and businesses.

The donation ceremony at Sealaska Plaza was attended by Elder and Deisheetaan Clan Leader Cyril George, who noted a resurgence of interest about Native cultures among young people in recent times. Many years ago, the Elders saw the Native way of life slipping away, George said.

“Now it’s a different story I’m seeing with our young people—interest in our language. Our way of life,” said George, who donned regalia and a Clan hat for the event.

The institute will take care of the recordings and ensure they are available to SHI’s patrons, said SHI Archivist Zachary Jones.

“We are grateful—Sealaska Heritage Institute is—and honored to have them. We realize the importance of what they are,” said Jones, adding the collection also includes a box of materials donated by Ray Peck that includes programs, newspaper clippings, correspondence and other items documenting the event.