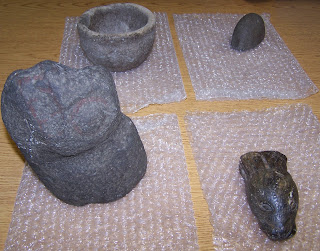 This December Special Collections received four fantastic stone items via a generous donation from Ronald Haffner of . The items, likely created prior to European settlement of , will be cared for and housed by SHI and known as the Ronald Haffner Collection. Haffner is a local businessman and his family roots at go back generations. Haffner’s heritage is of mixed blood, his great-great grandfather being one of the first white settlers to homestead at , and this same great-great grandfather married a local Tlingit woman.

The items donated were found by Haffner’s great grandmother while digging in the garden adjacent to their home. Thus in essence, these items are in part connected to Haffner’s ancestral Native heritage and forefathers. When Haffner was asked why he chose to donate these items, Haffner stated that he wanted to give these items to the public and allow people of all walks of life to study and benefit from them. They were also donated in the name of his grandmother, Edith Trambitas. This donation is truly significant for SCRC and for local Native heritage. The four stone items donated consist of a Grooved Maul, a stone bowl, what appears to be a Hammerstone-Grinder, and a decoratively carved stone item.

Concerning Grooved Mauls, these items were fashioned to a wooden handle and used as a type of sledge hammer. Although used for various jobs, these mauls, for example, were often used with a stone wedge to split and extract long wooden planks from standing trees. In turn, these sturdy planks were then used for home construction. In addition to being functional, this piece is significant because it hosts a carved zoomorphic head and was at one time painted, but some traces of the ancient red paint still remain around the eyes and teeth of the figure. This item documents a degree of carving arts and the functional ingenuity of ancient craftsmen of the area. (for more information about stone tools see Stewart, Stone, Bone, Antler and Shell, pp 31-32)

Another item donated appears to be a Hammerstone-Grinder, a hand-held item with a dual purpose. It shows use from hammering while is also worn flat from grinding on one side. According to scholar Hilary Steward the specific function of this tool is not known for certain, but is believed to have been a wood-working tool used for planing. This tool is also a testament to the carving activities of local Natives of the area during the pre-European contact era. (see Stewart, Stone, Bone, Antler and Shell, p 42)

In addition to a very good stone bowl, the final item donated was a seal-headed stone item. The function or use of this item is presently unknown and under investigation. It appears to be carved out of petrified wood or coral, or a somewhat unusual soft stone, but not soapstone. Decoratively carved as the face of a seal and with groves that denote it was once attached to a staff or some external item, its use doesn’t appears as that of a hand tool, but rather as something that was ornamental. It is clearly a well-crafted piece that a carver spent many hours on, so its function was important. At present we are looking for a specialist to examine it and offer some suggestions on its use.

This generous donation strongly enhances Special Collections’ holdings and provides locals, students, scholars, and people of all walks of life with public access to these cultural treasures. Those would like to view these items firsthand should pre-arrange an appointment with the archivist. If anyone would like to donate similar items please also contact the archivist.

The Juneau Empire recently featured a story on the Haffner donation in their paper (they made a few errors however). To read it click here.

UPDATE: these items are currently on display in the Sealaska Corporation building, main 1st floor lobby.
Posted by SHI Archivist