Parnell's board reappointments include Juneau's Zachary Jones and Ben Brown

On July 1, Gov. Sean Parnell announced appointments to five state boards. Two local men, Zachary Jones and Ben Brown, were on his list of reappointments.
Jones was reappointed to the State Historical Records Advisory Board. He is the archivist and collections manager for the Sealaska Heritage Institute and an adjunct instructor of history at the University of Alaska Southeast. Before coming to Alaska, he worked in the Rare Books and Manuscripts Department at the Swem Library, College of William & Mary in Virginia. He holds a master’s degree in comparative history from the College of William & Mary, received a certificate 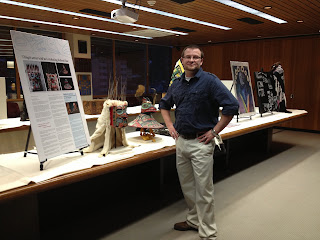 Also reappointed was Fairbanks resident Dennis Moser, head of Alaska and Polar Regions Collections and Archives at the University of Alaska Fairbanks Elmer Rasmuson Library. He has been reappointed as a representative of UAF.
The State Historical Records Advisory Board reviews project requests, grant applications and conducts reviews and planning for statewide needs relating to records management and historical documents.
Juneau resident Brown was reappointed to the Alaska State Council on the Arts. Brown, a company member at Perseverance Theatre, is an attorney and member of the Alaska Commercial Fisheries Entry Commission. He previously worked with Baxter, Bruce & Sullivan, and currently serves on the board of directors for the National Assembly of State Art Agencies and on the board of Alaska Public Media. He has been reappointed to a public seat.
Also reppointed were Aryne Randall of Wasilla, and Kesler Woodward of Fairbanks.
Randall is a district manager for Wells Fargo Bank, and Woodward is an academic affiliate at the University of Alaska Museum and a professor emeritus of art and northern studies at UAF. Woodward, who formerly worked at the Alaska State Museum, was awarded the first-ever Alaska Governor’s Award for Lifetime Achievement in the Arts.
The mission of the Alaska State Council on the Arts is to enrich the cultural life of the state by encouraging and supporting excellence in the arts, provide opportunities for every Alaskan to experience the arts, promote the practice and enjoyment of the arts in Alaska, and guide the development of the arts throughout the state.
In addition to the State Historical Records Advisory Board and Alaska State Council on the Arts, Gov. Parnell announced appointments to the Alaska Police Standards Council, Local Boundary Commission and Prince William Sound Oil Spill Recovery Institute Advisory Board.
For more, visit gov.alaska.gov/parnell/press-room.html
Posted by SHI Archivist